Your message was sent!

User Case Study: High School Students Use Maple to Explore and Learn Math beyond Textbooks
Appleby College gives their students an early start in advanced math by introducing them to tools used in university and industry. 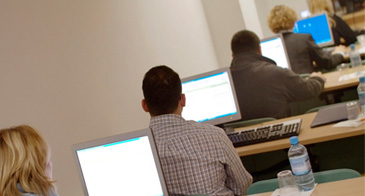 Educators in high schools around the world have discovered that Maple helps them give their students a head start in mathematics education. As a high school math teacher, Calvin Armstrong of Appleby College, a private high school in Oakville, Ontario, Canada, gives his students an early start in advanced mathematics by introducing them to tools used in university and industry. He wants his students to push boundaries and excel in their quest for knowledge. It is a philosophy that is embraced by Appleby College as a whole, making it known across Canada for academic excellence.

Being a math teacher, Calvin wants his students to expand their understanding of math and its application in the real world. While encouraging students to go beyond the obvious, he introduces them to tools and techniques that help them see beyond the theories in the textbooks, to implications in their future studies and work.

It is with this intention that Calvin introduced Maplesoft’s technical computing software, Maple, to high school students. Maple is a powerful general purpose math tool designed to provide an environment for educators and students to explore and 'do' math. Used creatively, Maple helps students learn better and faster. It illuminates theory, clarifies the abstract and gives form and substance to general principles. Calvin first introduced Maple to his grade 12 classes. The students responded so positively, and it made such a big difference in their learning, that he decided to start early, and introduced the power of Maple as early as the 9th grade.

Here is what Calvin says about his students’ use of Maple:

“Maple lets students push boundaries that they couldn’t with other tools. It incorporates all the aspects of their mathematical understanding, from algebra to geometry and calculus. It takes all of their formal understanding from textbooks, and puts it into an algebraic context or a graphical context. Maple really is an environment for students to play mathematically. However, using Maple is not limited to mathematics; it can also be used in any stream of science or technical course. It is a tool that will start them in grade 9 and last them well into university.

We realized the potential in Maple to start students earlier - it is simple to learn, but powerful enough to let students grasp the concept.

Initially, at Appleby, we were using Maple in the 12th grade calculus class, when students are almost heading out into the university, becoming familiar with advanced mathematics. We realized the potential in Maple to start students earlier - it is simple to learn, but powerful enough to let students grasp the concept. So we started them on Maple in Grade 9 mathematics. Linear systems are not only heavily algebraic, but it also has a graphical component. We started using Maple to teach the idea of substitution, leading the students through the algebraic process. We were very surprised to observe that not only did they grasp the idea of 2x2, but instinctively considered the possibility of having three variables, and figured out how to do a 3x3. Students advanced their own learning by asking themselves the question, ‘what next?’

Very often we talk about math being a search for patterns. We as teachers want students to explore how a change in variable or value affects a given situation. Doing it by hand is extremely tedious, and the search for pattern overwhelms the pattern recognition itself. Graphing calculators can be clumsy and not very efficient. Doing animations with Maple gives students quick values, allows them to nicely move values on sliders, and provides animation. It can also be incorporated into one document that can be distributed to other students, or projected onto a whiteboard while the students explain the animation in progress. The document can be shared easily between students and the teacher. In fact, these documents can be shared with other students and faculty around the world, increasing chances of collaborative learning.

Maple is also a great companion for the math teacher. It provides the teacher great flexibility in the development of assignments and tests. It gives them flexibility in the creation of the graph, the ability to zoom in and out by changing parameters, and the means to develop a whole series of questions so that there is differentiation in the classroom. Maple really helps the teacher develop questions and lessons in a meaningful way without spending too much time.

Students quickly realize that Maple is a sophisticated tool with a breadth of options to explore. It helps students understand that mathematics is a growing idea, far beyond the text books. Maple helps in expanding the students’ understanding of mathematics, and helps them realize it is not limited to what they are learning now. The fact that this software helps to explore and understand the depth and breadth of mathematics is a huge advantage for Maple.”

Watch a video of Calvin Armstrong talking about his use of Maple in his math classroom: